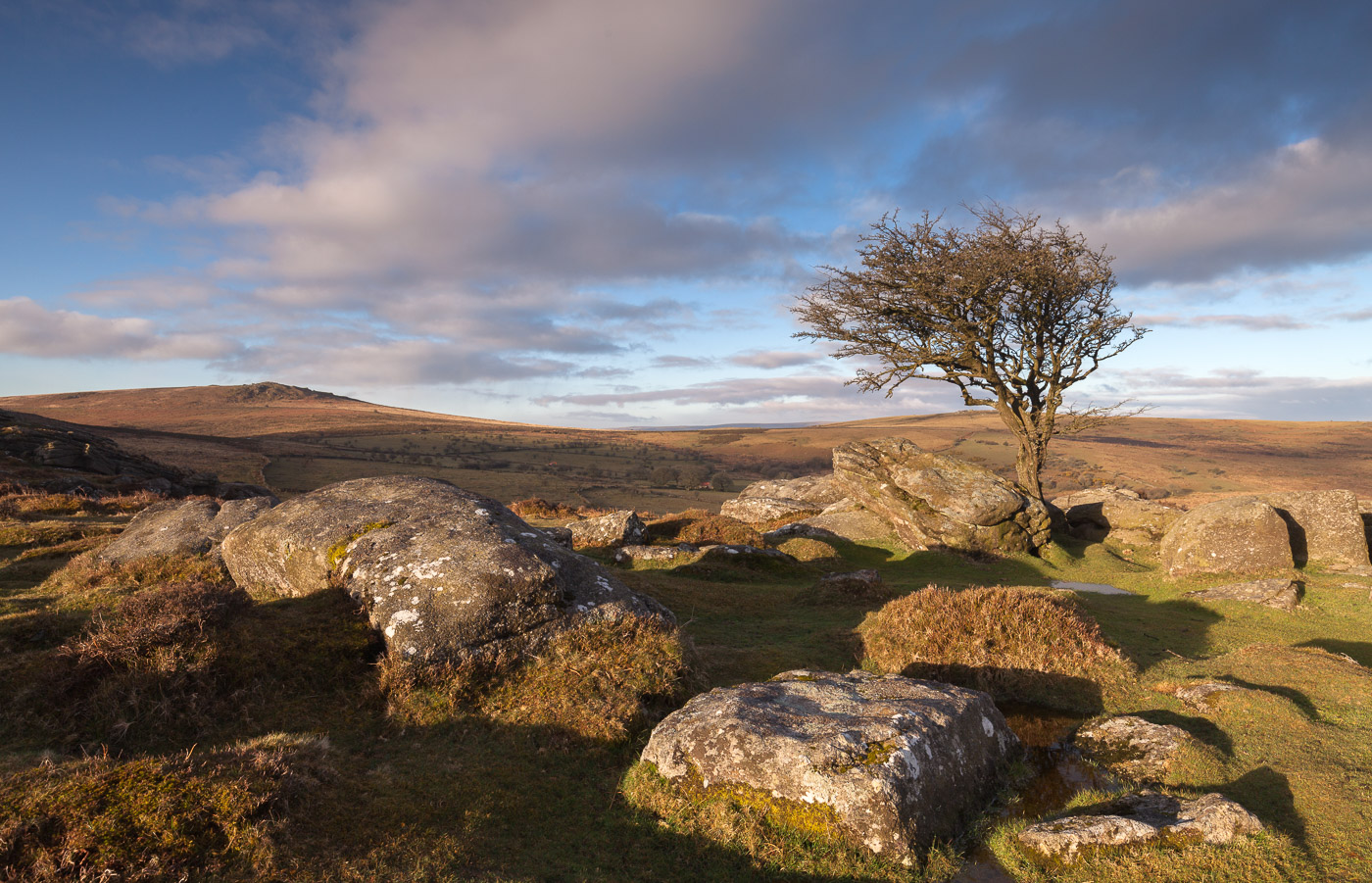 Sometimes it feels like the odds are really stacked against you as a landscape photographer and this trip to Saddle Tor on Dartmoor was one of those days. Having pulled myself out of bed at 3:45 am I was confident that I would have plenty of time to watch the subtle colours of dawn muster before the rise of the sun. Saddle Tor isn’t one of my usual haunts and I have seen it in loads of photos by other local photographers. One subject that I often see is a tree which is quite well photographed… Arriving in plenty of time for sunrise I made my way up to the top of Saddle Tor looking for ‘the’ tree. Much to my dismay it was nowhere to be seen! 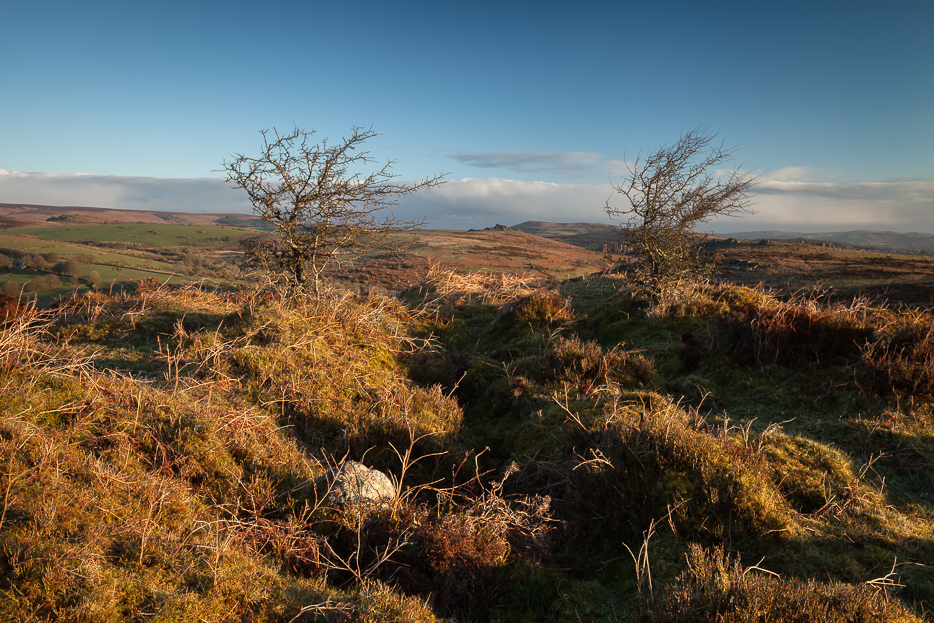 I loved how the sunrise cast stunning shadows across the moorland on Saddle Tor.

I was quite perplexed at the absence of the tree. The wind was howling across the tor and it was freezing cold while I scaled every part of the two peaks of Saddle Tor before conceding defeat as the sun was creeping up behind Haytor. Having driven around 50 miles I decided to suck it up and carry on taking photos. I wondered down the north side of Saddle Tor as the rock formations looked quite interesting. I was looking to capitalise on the low dawn sunlight casting shadows across the moor and I wasn’t disappointed. Photographing scenes like the one above I was beginning to get into my groove again. I think it is important for a photographer to be able to react to different situations and conditions; it definitely keeps the mind fresh.

As I worked my way around the north side of the tor while trying to avoid the puddles I finally saw it over to the North West. Yes, there was the tree! I had found the tree that is probably one of the most photographed on Dartmoor! I worked my way over there and it was immediately clear to see just why this small spot is so popular. The sun was just kissing the rocks and a mound of plants. I knew I had to work fast to make the most of the time I had before the golden hour transitioned into the light of full day. 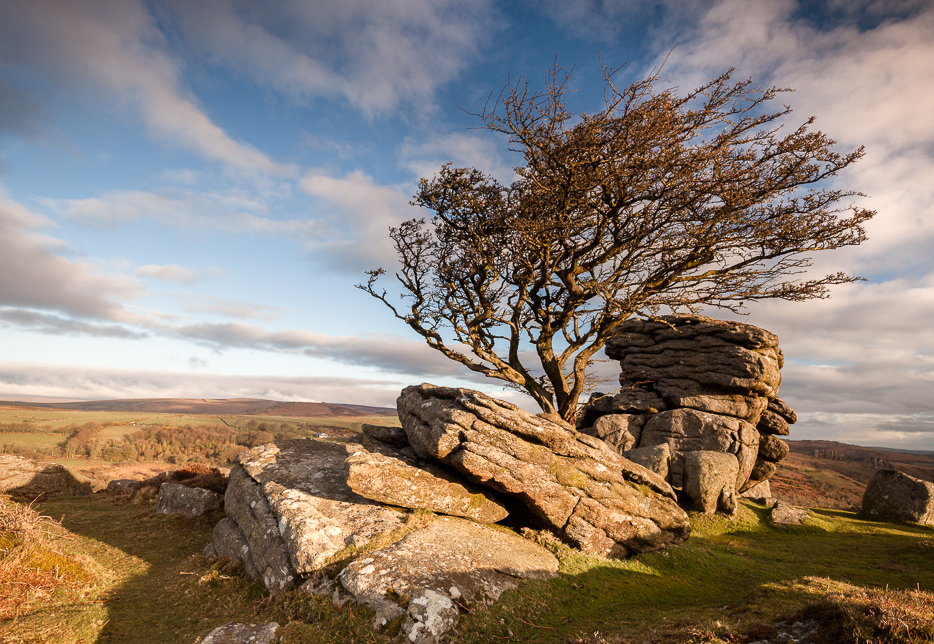 While photographing different compositions of the tree the cloud began to move in. I was expecting some light cloud which would only last an hour or two according to the BBC weather website. I was quite happy as it was adding much needed character to the sky. I bet nearly every landscape photographer loves light clouds to complement their photos! 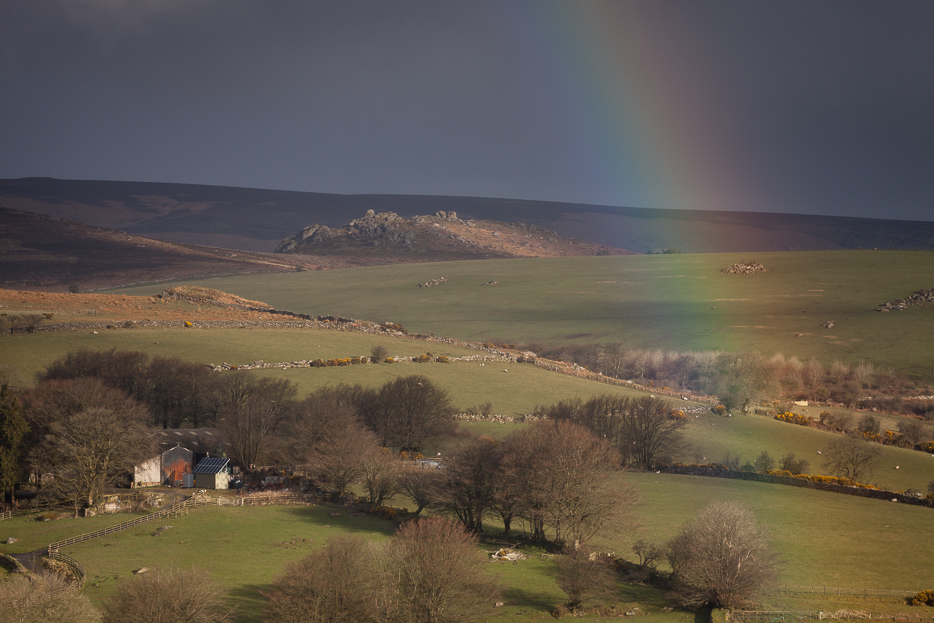 I noticed the odd spot of rain hitting the body of my Canon EOS 5D Mark 2 and looked up and around to see this wonderful rainbow hitting the countryside behind me. the cloud had become much thicker as the rain approached. The moor was dappled in beautiful sunlight between the cloud cover; it was quite beautiful. I continued to work while wiping rain spots off of my Lee Polariser before eventually I decided it was time for a well-earned cup of coffee.

While the rain and wind blew through I enjoyed a couple of cups of coffee and some food. Once the rain eased off I braced myself for the cold and headed back out to check out the Emsworthy barn and the grounds that surround it. I was hoping to scout out potential shots for the upcoming bluebells, and I have seen some beautiful shots of them around the Emsworthy Mire. I was quite surprised to see no sign of them at all there. I will post some photos from Emsworthy in another post.

On the whole I had a great morning despite a lot of things making it much harder. I think it makes getting some reasonable photos all the more satisfying. I definitely think I had to work for them and I think that is a good thing in the long run. It was also a good reminder that it isn’t just the photos at the end of the trip that matter – it is enjoying the adventure along the way that really counts. The photos are just the icing on the cake.

For reference the tree is around the area marked on the map below. You may find the area referred to as Saddle Tor, Holwell tor, Holwell rocks or even the Emsworthy rocks.