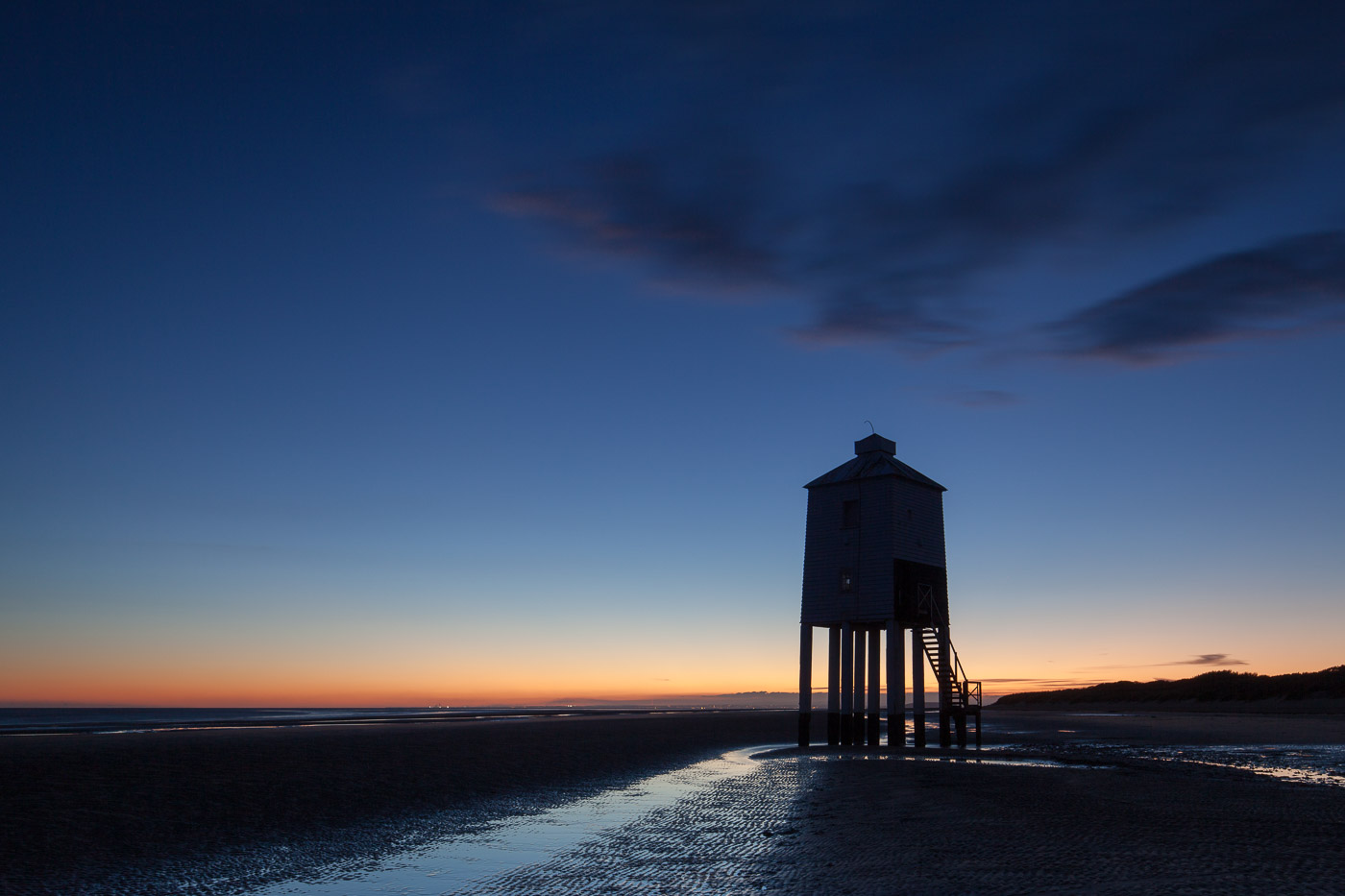 I have been meaning to photograph the low lighthouse at Burnham-on-Sea for quite some time now, especially having seen so many great photos by other photographers. The weather looked promising for Sunday evening although there was the potential for clear skies as the sun set. I decided to head there anyway as I had several shots in mind and was keen to photograph another new spot.

My plan was to head to the north to north eastern side of the lighthouse to photograph it as it caught the colours of sunset. I then planned to work my way clockwise around it to maximise the potential shots I could get for the conditions and tide. The tide was still going out which meant that the sand was being freshly exposed and pristine. The patterns in it were beautiful; I managed to incorporate them into several of my photos. The light was beautiful and the clouds were variable, although towards the setting sun the sky was clear for the most part.

I have decided to post the golden hour ones in another post and focus on the ones from the blue hour in this post. The main photo of this post was taken almost an hour after the sun set. The band of orange on the horizon was stunning to see and every bit as vibrant as it is in the photo. I loved how the light still managed to kiss the edge of the small clouds above the silhouetted lighthouse.

During the early stages of blue hour there was a magenta hue to the light and the overhead clouds were mottled in colour as the last light from the sun illuminated them. In the photo below you can see the clouds on display, complimented by the pristine beach, freshly exposed by the ebbing tide. The good thing about this stage of the blue hour is that the sun no longer cast a shadow over my shoulder as I look back on the lighthouse. 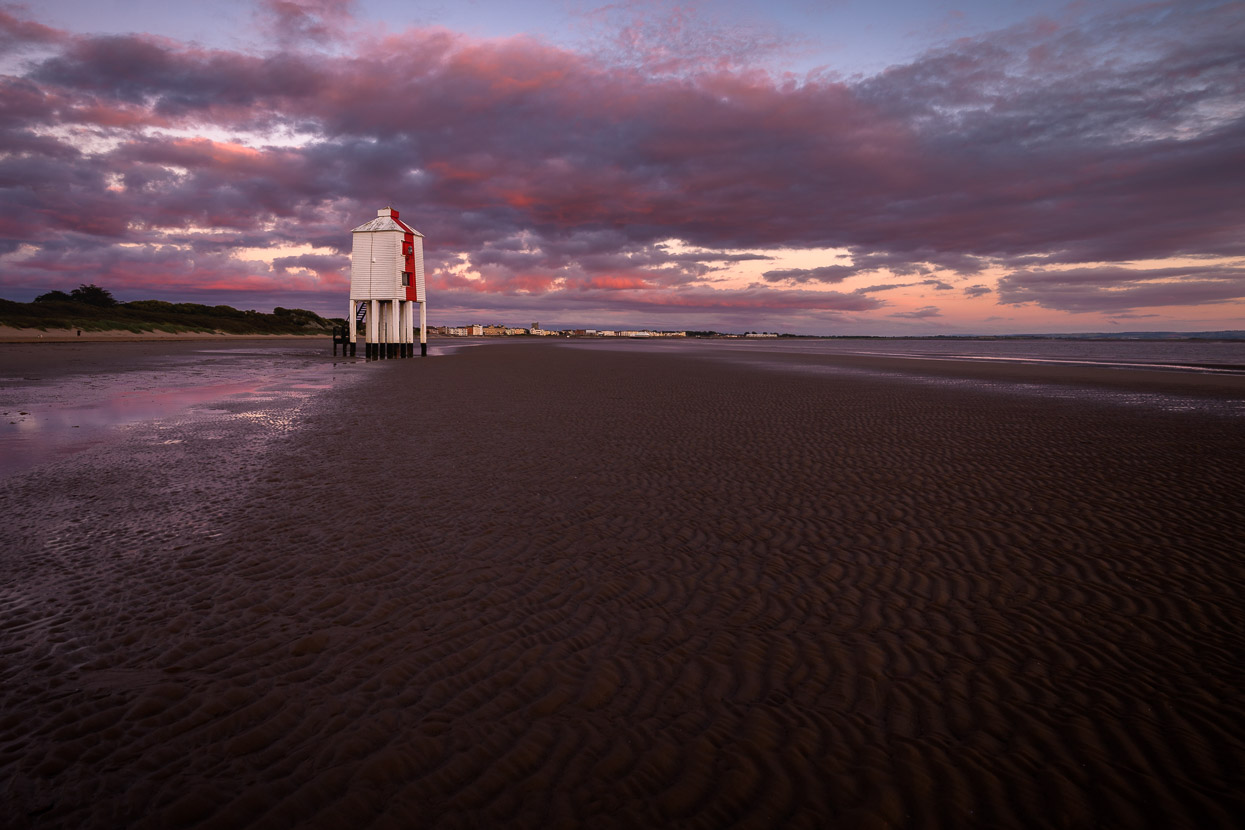 As the light show changed the clouds were no longer capturing the vivid colours from the sun, but the orange glow that stretched across the horizon was enough to subtly light the low lighthouse. I love how that in the photo below, even as dark approaches the lighthouse can still be captured in stunning detail. I love the reflection of it too although it is a shame there wasn’t a large enough pool to get a complete reflection. I think that in some ways it is better without it, because it highlights the texture of the beach and gives the rest of the scene room to breathe. 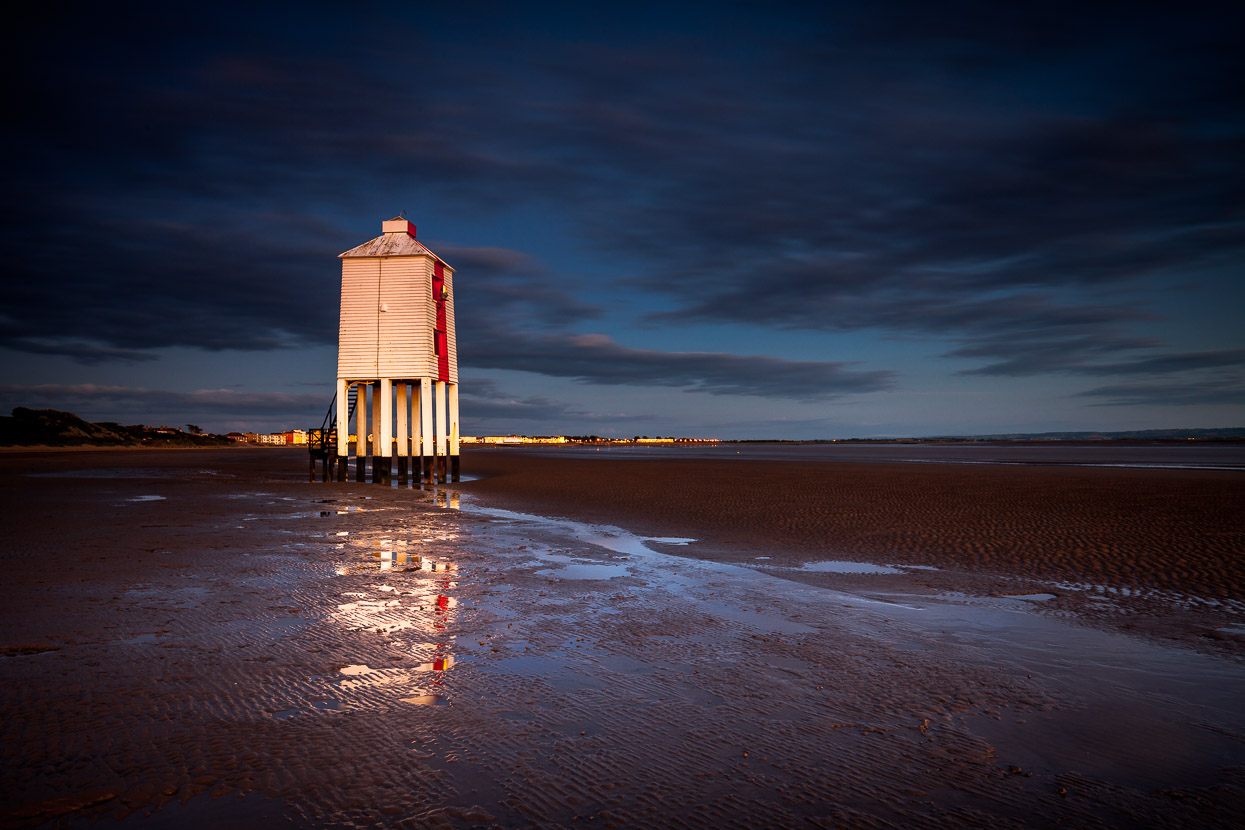 The low lighthouse caught the dusk light, making it stand out against the street-lit backdrop of Burnham on Sea.

Exploring Somerset and beyond

It was good to explore another part of Somerset. I am gradually widening my reach to capture photos of some of the beautiful scenes much further afield. I have a list of things to shoot that I could really do with a camper-van type vehicle to make life much easier. With a camper vehicle I could shoot the evening light and sunrise light and have a way to edit photos and enjoy bacon butties while I am there. I can’t wait for the evenings to draw in a bit so that it becomes possible to shoot an area during the morning and the evening, with only a short break in between.

My trip to Burnham-on-Sea was well worth the drive. I will definitely be returning there again; and I would like to shoot it at sunrise too. The photos that I got completely justified the 70 mile each way trip.